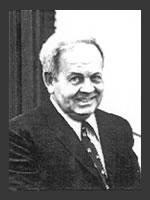 "Scientists the world over have benefited and will continue to benefit from the teachings of Lloyd Thomas of Missouri."
— Dr. Frank Goodman, U. of Waterloo

"The most effective teacher that I have ever known, Lloyd Thomas transmitted the sense that observing nature is the most rewarding form of entertainment, he convinced us of the joy of inquiry and demonstrated to us that nature will never disappoint in its revelations."
— Dr. Harold Wachman, MIT

"How well I remember Professor Lloyd Thomas. He was committed to our success, even when we didn't know what success was all about."
— Dr. Edward Blaine

Thomas Lecture
Lloyd Brewster Thomas, born in Iowa in 1909, spent his early years in Alberta, Canada. He came to Columbia in 1922 as an undergraduate, received an A.B. in Chemistry in 1930, and was elected to Phi Beta Kappa.

After obtaining his Ph.D. in Physical Chemistry at the University of Minnesota with G. Glockler in 1935, he returned to MU as an Instructor. His entire professional career was spent on MU's campus (forty-four years as an active faculty member), except for two years during which he held visiting appointments at Oxford University and the University of California, Berkeley. Following his "retirement" and appointment as Professor Emeritus in 1979, he remained active in research until his death in 1991.

Lloyd is best remembered as an inspiring teacher and a careful experimentalist, whose investigations into gas-surface energy transfer phenomena, brought him international recognition.

The Lloyd B. Thomas Chemistry Scholars Program was established in 1993 as a lasting tribute to this extraordinary educator and scientist. It brings to the Department of Chemistry at the University of Missouri outstanding speakers with national and international reputations who, through formal seminars and informal interactions with students and faculty, expand our scientific horizons and keep us in touch with the foremost contemporary research in chemistry. Individuals wishing to make gifts to the endowment, which funds this memorial to Lloyd, are encouraged to do so. Additional information concerning this endowment program is available from the Chemistry Department Office, 125 Chemistry Building.

Current and past lectures